Trust is one of the most significant synthetic forces within a society. Without the general trust that people have with each other, society will fall apart [Simmel 1908/2009; Möllering 2001:405]. Trust seems like a natural phenomenon. But there is no consensus among scientists about how trust should be defined.

Trust is an abstract concept that is often confused with related concepts such as credibility and reliability and consists of several layers. It has cognitive, emotional, and behavioral dimensions and also includes a broad range of relationships. Trust can relate to people, institutions, and governments, but also to information, material things, systems, etc., and is, therefore, a complex, disputed concept [Wang & Emurian 2005:108].

Conceptualization of trust
For a better understanding of the different forms of trust and how they affect each other, three types of trust are distinguished: dispositional trust, mutual trust, and institutional trust. Dispositional trust is the general attitude of trust as a part of an individual’s personality. This basic trust is formed in the first two years of someone’s lifetime. Someone who grew up in an uncertain environment will have more difficulty trusting others and have less self-confidence than someone who grew up in a protective environment that offered many certainties. The stages are shown schematically below: 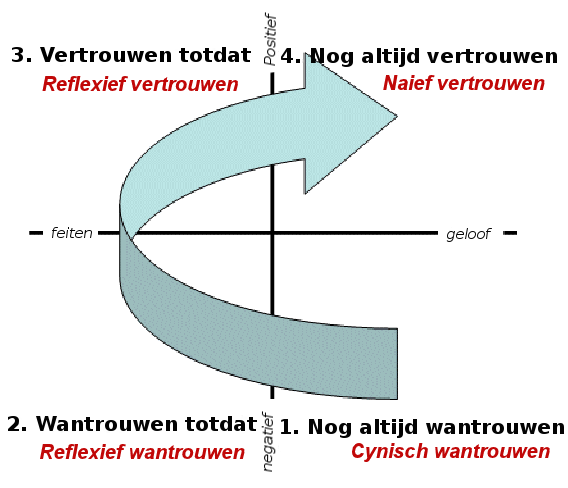 However, the stage in which someone is situated isn’t permanent for the rest of his/her life. Most people will go through different stages of trust in the course of their lives. Suspicious people, for example, can develop into more trusting people and vice versa [Benschop 2013]. The way respondents place trust has a major influence on the ideas about the safety and possible risks of RCMIs. The responses on web forums suggest that most people fall into the “naive trust” category. Although it is known that RCMIs can be hacked, people remain calm and there is the confidence that such problems will be solved.

Mutual trust refers to trust in the relationship with other people. This kind of trust is formed by both direct and indirect experiences with others since the impression of someone is not only formed by the observed behavior, but also by what others say about this person. This information can be used to get a better understanding of the social status/reputation of that person. This level of trust applies to the relationship between patients and doctors in this study. It is expected that doctors, due to their social status, have a major influence on patients’ perceptions of the safety and risks of RCMIs. Lastly, institutional trust is about trust in social and technological systems. This final form of trust can be divided into organizational trust, transactional trust, and social trust.

All these types of trust are interdependent and influence each other. Schematically this looks as follows: 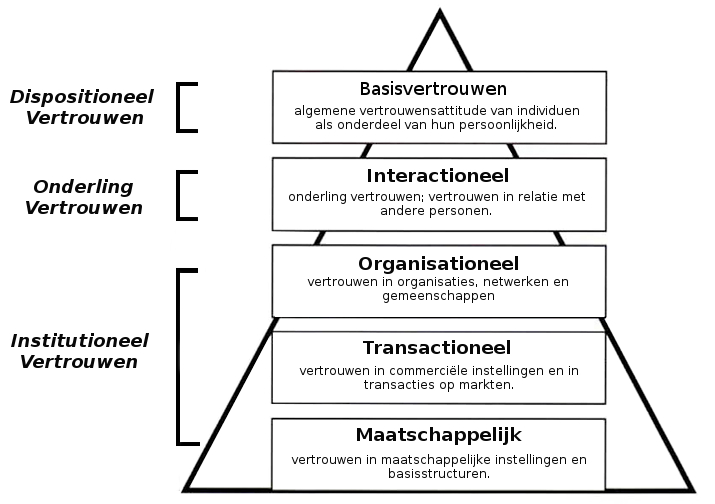 The three stages of trust are of great influence on how ideas about RCMI’s come about. In this thesis, the emphasis lies on institutional trust. The work of Simmel is used as a theoretical reference for the trust relationships regarding RCMI’s, [1908/2009]. Trust reduces uncertainty and compensates for not knowing, it is a hypothesis about future behavior, considering interpretive knowledge temporarily as ‘certain.’ Trust is especially applicable to situations where precise and reliable knowledge is unavailable. Someone who knows nothing is unable to put trust in others in a reasonable way. Trust is, therefore, a middle position between knowledge and ignorance in dealing with others [Simmel 1908/2009:315-316]. From a sociological system perspective, Luhmann analyzes: trust as a mechanism to reduce social complexity in situations where people have to deal with uncertainty [Luhmann 2000:103].

My thesis contains four main themes. First, the trust of the patient’s in the expertise of the physician and the functioning and safety of the RCMI. Second, the confidence of the physician in the selection and application of a RCMI. Third, the confidence of manufacturers of RCMI’s in the safety and effectiveness of their product. Fourth, the confidence of security experts in the safety of the current RCMI’s. With this thesis, I want to contribute to the question of how these life-changing consequences of modernity affect daily life. To obtain deeper insight into the processes that led to the current digital age, I will first briefly discuss the three phases of the industrial revolution. Followed by an outline of how the latest developments provide not only new opportunities but also new risks.

The three phases of the industrial revolution
Much has changed since the beginning of the industrial revolution in a relatively short period. The Industrial Revolution began in England around 1750 with the rise of steam coal-powered technology and the printing press. This phase was characterized by the sharp increase in labor productivity through the mechanization of production. Machines, powered by fossil fuel, increasingly replaced human and animal labor. Also, the printing press led to a massive growth of media in the form of newspapers, magazines, and books. This first phase of the industrial revolution, also called ‘the first industrial revolution,’ continued until the end of the 19th century. With the invention of the combustion engine powered by oil, the rise of the chemical industry, and the growing consumption of electricity, around 1900 the second revolution began. The first forms of electrical communication like the telephone, the radio, and television were invented.

The third revolution was introduced after 1940. This included the applications of nuclear physics, microbiology, and automation of production using computers. Important at this stage is the transition from analog mechanical and electronic technology to digital technology, which means that data is converted in such a way that it can be processed by computers. With the introduction of the Internet, digital cellular phone networks, and the World Wide Web, time and space no longer form barriers for people to communicate with each other. All these three phases of industrialization have led to commercialization and market formation, and an increase in the division of labor, bureaucratization, urbanization, and growth of technical and scientific knowledge [McLeod 2011:1; Rifkin 2008; Russell 2009:662; Wilterdink & Heerikhuizen 2009:50-55].

Modernity and the increasing complexity of risks
Respondents’ thinking about the safety and possible risks of RCMIs is partly influenced by the time in which they live. According to Bauman, we live in a phase of ‘liquid modernity,’ in which institutions but also the lives of individuals are continuously subjected to change [Bauman 2012:9, 15]. Humans are forced to be flexible and to adapt continually. There are no absolute certainties, and every action reveals new uncertainties [p.10]. This process is enhanced by the increasing mobility within society through the development of mobile telecommunication. With the advent of the Internet, digital cellular telephone networks, and the World Wide Web, time and space are no longer barriers for people to communicate with each other.

Mobile telecommunications make it possible to create portable medical technology, and by miniaturize it, that can be inserted into the body. They can also be remotely controlled through a wireless remote connection. On the one hand, people will be empowered, but on the other hand, new risks emerge [Stones 2007:329-30; Braun 1996:755]. A RCMI can prolong the life of a patient, but because these implants can be hacked they simultaneously pose a danger to one’s own body.

Anthony Giddens emphasizes the importance of reflexivity. Reflexivity refers to practices that are driven by observations and ideas [Stones 2007:329]. With the arrival of computers, the pace reflexivity grows received an enormous boost, that, despite the positive developments, also leads to unintended perverse effects. Giddens calls this the “Juggernaut” of modernity because new developments also create new risks. We live in an era of reflexive modernization [Beck e.a. 1994/2007]. The word reflexive does not refer to reflection, but self-confrontation. The transition from the industrial to the informational era [Benschop] is a development that is unwanted, unseen, and compulsive. The adverse effects of informatization and computerization are increasing and are becoming more evident. Reflexive modernization is the self-confrontation with the consequences of the ‘risk society’ that can not be maintained and purified in a system of an informational (and remotely communicating, mobile) society. The risks are too complex that they can not accurately be estimated and thus have become unpredictable [Beck e.a. 1994/2007:5-7,59]. Beck uses the concept of “risk society” to indicate that the rapid developments force people to live with a wide variety of different, mutually contradictory, global, and personal risks. These risks cause a lot of uncertainty in several areas where no easy solutions are available, and new developments bring new problems [Beck et all 1994/2007:5; Braun 1996:755-756].

Faced with this new situation, people have no idea how to deal with this development. As a result, people do more of the same. The paradox here is that the pursuit of more control creates the opposite effect [Beck et all 1994/2007:9,58].  RCMIs are increasingly being used for diseases from which people died prematurely before this invention. Although it is known that RCMIs can be hacked, there are plans to expand wireless applications on RCMIs. Security experts warn that as systems become more complex, it becomes increasingly difficult to keep them secure [Benschop 2013; 47]. The discovery that it’s possible to hack a RCMI created an additional risk, with still no solution available. On the one hand, producers can strive to protect their medical implants against hackers, but on the other hand, hackers will respond to this by trying new ways to hack into their systems.  Ulrich Beck raises the question of who pays for the cost of progress, and if there is a cost, to what extent is there progress? The threats to modern society are so complex that they are not always observable and exceed our understanding [Braun 1996:755]. Resources that are successfully used in the past need to be continuously examined and revised, because it can turn out that they became useless or even counterproductive as a result of the constantly changing circumstances [Bauman 2012:18]. How respondents deal with the increasing complexity of RCMIs provides insight into the extent to which people have confidence in the possibilities of RCMIs. The information and reactions on Dutch web forums suggest that many people have never been confronted with the news that RCMIs can be hacked before. The expectation for this study is that most respondents are hearing about the hackability of RCMIs for the first time and think that the chance of this is very small.